Board Games and Dads

There is no doubt that board games have blown up in terms of popularity in the last 10 years. There are more board games on the market now than any other time in history, and a lot of them are far more in depth than even the most-cursed Monopoly game we all grew up with. You can hunker down with your kids and play a game like Settlers of Catan for a full hour of dynamic, tactical game play. The best part of tactical strategy games is that they're never the same - each game is a fresh take on the concept.

We've put together a list of our favorite strategy board games for dads and their families. These games teach your kids to think ahead, plan their moves, and invest in a long-term strategy that helps build focus and tenacity. Even better than the lessons they'll learn is that these games are truly a lot of fun and they’ll always remember game nights with dad. 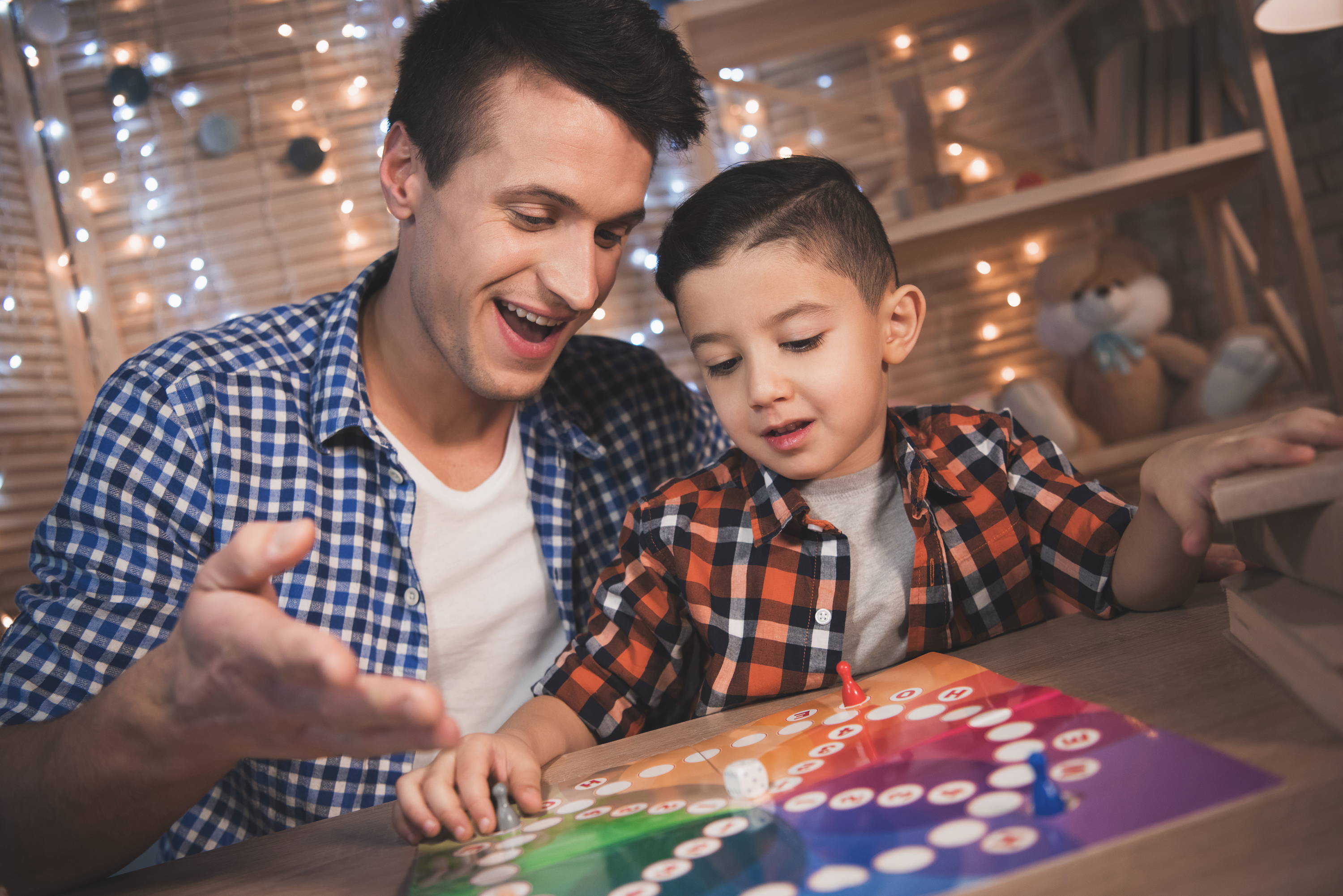 The best strategy board games for dads with younger kids

Strategy board games are often complicated, but younger kids can still get involved and enjoy themselves. You can either reduce the complexity for them, play in teams with the younger ones, or pick up one of these two games that are designed specifically for younger players.

Ticket to Ride is a really fun game about building rail lines across a country (or continent, with the adult versions of the game). This version is meant for 5 years and older to introduce the concept and still help them build up their tactical muscles. This game requires future planning, observation skills, and some math, all of which are fantastic additions to an engrossing game.

If you or your kids are big train nerds like us, then this is an even better fit as the themes center entirely around railways and trains.

This game is a boiled down version of Clue, where you investigate, reveal suspects, and cooperate with the other players to find the villain! Outfoxed! is a great game to play with your kids that teaches cooperation, planning, and strategy but it does so in a way that doesn't incentivize screwing the other players over.

One of the best aspects of this game is that it can be played solo. If you're tired of your kids going to the screen any time they want to play by themselves, this game can keep them entertained instead. Plus, it's a lot of real-life dad pride to see your child want to show you the strategies and concepts they learned during solo Outfoxed! play in your next game.

There aren't a ton of strategic games for younger kids, as they're not quite used to planning ahead, but these two are definitely our favorites. They're both funandaccessible for kids as young as 5, but enjoyable by older kids and adults as well. 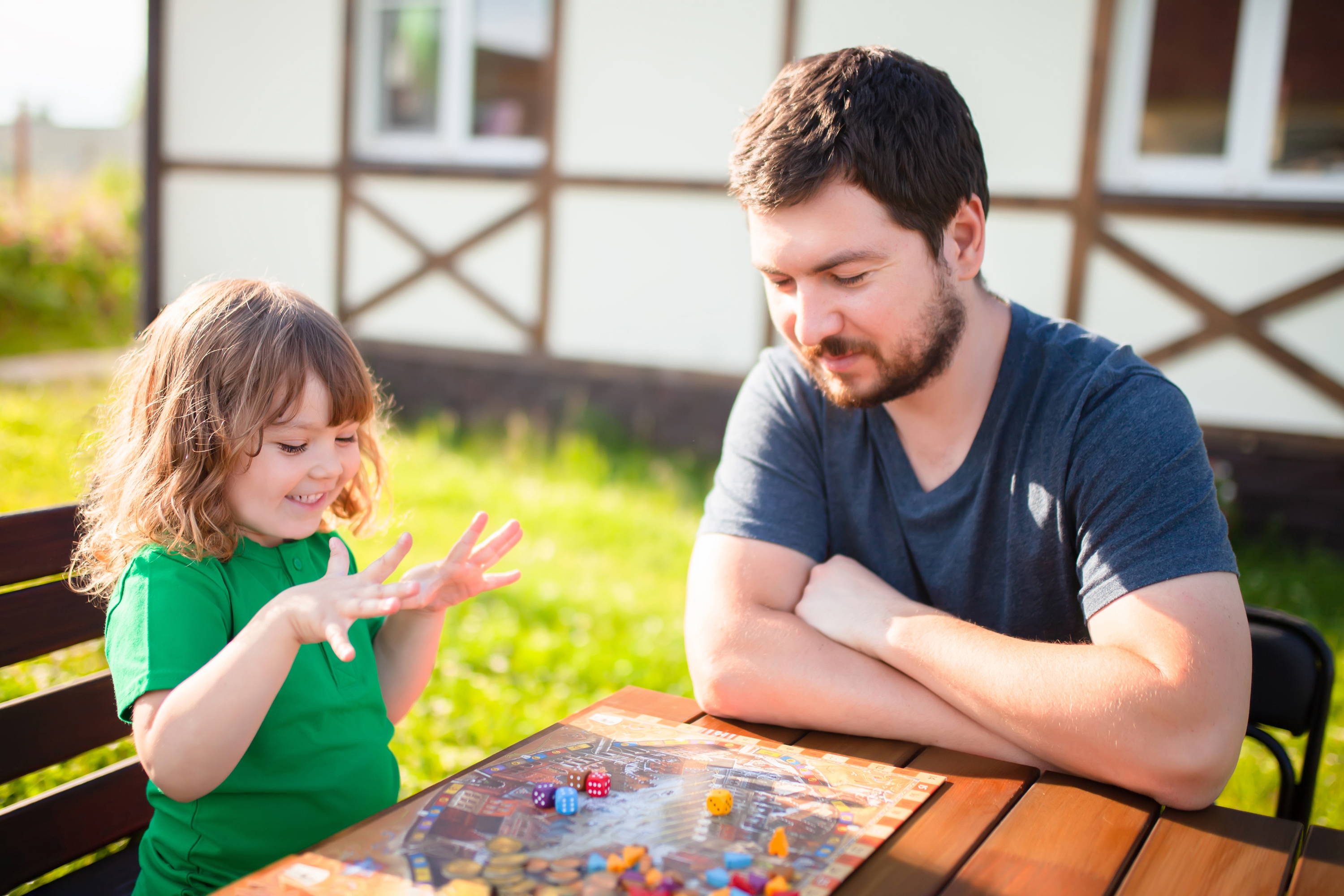 The best strategy board games for dads with older kids

These games are some of the most fun, gritty, tactical board games on the market. They range in complexity and the length of time needed to play a full game, so pick one that fits your style and time constraints and you'll have a great time with your family.

This might be the most well-known strategy board game that exists. In this world, you trade resources, build your civilization, and avoid bandits while trying to win overall. Catan teaches shrewd negotiation and cooperation, helping others while still keeping your own success as the ultimate goal, and prioritization. The game is very rarely the same each time you play, and there are even expansions to add layers and depth to the experience.

Probably the oldest strategy board game, Risk is a ton of fun but it can make for somelonggames. You pick a country, build your army, and move forth to conquer the world. This isthestrategy board game, requiring you to build your forces tactically while also choosing the best way to move around the map. When you have more than 2 players, it gets even better but more complicated.

Risk is honestly the kind of game you start on a weekend morning, knowing full well that you're going to be there for a few hours and loving every minute. (Except when they team up against you, but hey, you can just ground them if they do.)

This game is a classic strategy game of unit placement, guessing, and logic. You place your hidden units, which range in power, across from your opponent, who does the same. Each unit has unique movement and attack power, and some are designed specifically to take another unit down. The result is a very easy game to learn but one that is difficult to master.

The best part of Stratego might be that, since it's a largely open-source concept, the game itself has been adapted to tons of different intellectual properties, from Star Wars and Star Trek to Babylon 5, medieval war, and Warhammer-esque aesthetics. Whatever floats your boat, Stratego will help you scratch that itch.

A game of conquest and strategy in a fantasy setting, Small World appeals to anyone who likes fairies, wizards, giants, and the like. It's complex, beautiful, and a ton of fun, but like Risk, it's a good time sink. You'll want to break out snacks and sodas when you embark on a Small World campaign, but it's a great way to spend a Saturday morning.

Every single child should play chess, at least a bit, in their lives. It's a game that is endlessly complex, but easy to learn, and just about everywhere you go, you'll find someone who plays it. There are few games that teach "thinking ahead" and planning out your future moves like Chess, and chances are you can find a copy at a garage sale for under $5. Along with Go, there are few classic strategy games that are as solid, replayable and intellectually stimulating as Chess. There’s also usually a solo option available on any computer, phone, or device which can help them gain strategy and confidence. Get your kids into board games

When we decided to make a list of our favorite board games, we simply thought of the ones we would like to play with our kids the most. There are a ton of more complex games like Arkham Horror or Fury of Dracula that are more like a session of D&D - highly fun and complex, but also long slogs that can take a whole day to get through. While these games are a ton of fun, for kids, the games we've assembled here are your best bet. They can entertain for hours without bogging up a whole day, and they teach power lessons in strategy, logistics, and planning.

What are your favorite strategy board games to play with your kids? Did we miss any - particularly for younger kids - that you think should be here? Let us know!

What Is A Stroller Wagon?

Do I Need An All Terrain Stroller