The Family Dog Died — How To Tell Your Toddler, Pre-teen, Or Teenager Skip to content
Free US Shipping Over $99 (after discounts applied). Easy Returns. Free Exchanges.
843-505-8658 Contact Podcast

The Family Dog Died — How To Tell Your Toddler, Pre-teen, Or Teenager 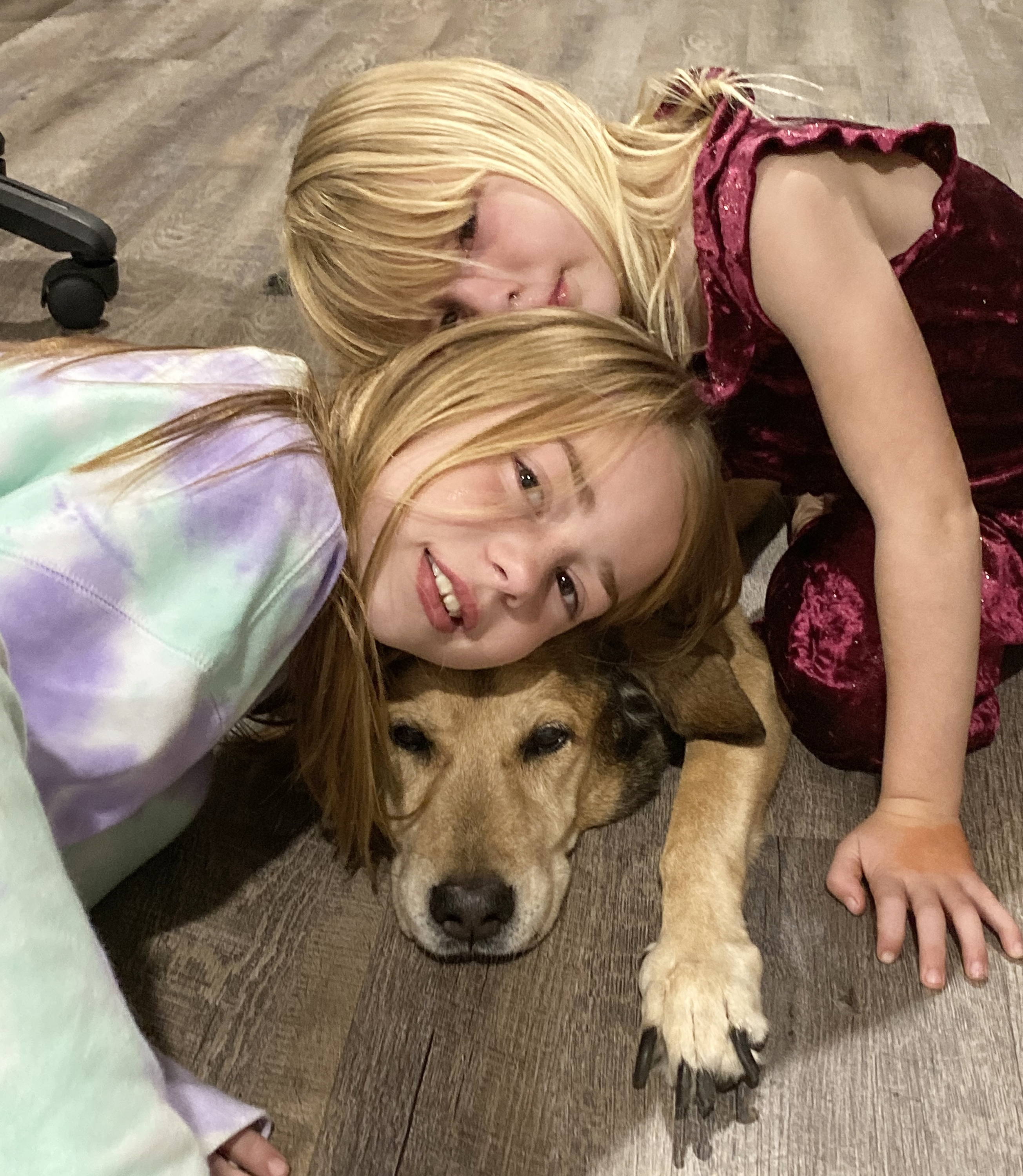 We are so damn sorry.

Because if you’re reading this, it can only mean one thing; your sidekick, your partner-in-crime, your family dog has passed away.

We’ve been there. We know that heavy, empty feeling. And we know the feeling that follows. The sinking dread when you realize, “S#*t, now I have to tell my kids our dog died.”

You might be wondering how to convey such sad, complex information to a mini-human that defecates in its pants. Fair question. Luckily for us, the behavior of children dealing with loss has been fairly well documented, and we’re about to break it all down.

Psychologists Gauge by the Stage

You don’t need a degree in behavioral psychology to know a child’s mind processes events differently at each stage in development. A bumblin’, stumblin’ toddler and a teenager hopped up on hormones (and god knows what else) are, naturally, going to handle the death of the family dog differently.

Knowing this, psychologists studied childhood bereavement in the five stages of development, from infants to teenagers. So, we’ve outlined the thinking and behavior patterns of each below. Just find your kid’s age range, grab a bourbon, and lets figure out how to make the pain of loss a bit more bearable for your little monster(s).

All things have a silver lining, even death. It may not feel like it, but if your dog passes away while your child is an infant, there are some pros. Namely, your kid’s brain is so new that it hasn’t fully formed the necessary components for memory retention. There is no feeling of loss of a pet, because there is no memory in the first place.

The not-so-silver lining? All of your incredible parenting feats during this stage go vastly unappreciated until, well, much later.

Advice: Consider yourself lucky-ish. Your dog is chasing mailmen in heaven, and your kid will never be emotionally scarred by it. Plus, you get to put the whole death conversation on hold for the time being. Sometimes procrastination is a beautiful thing. 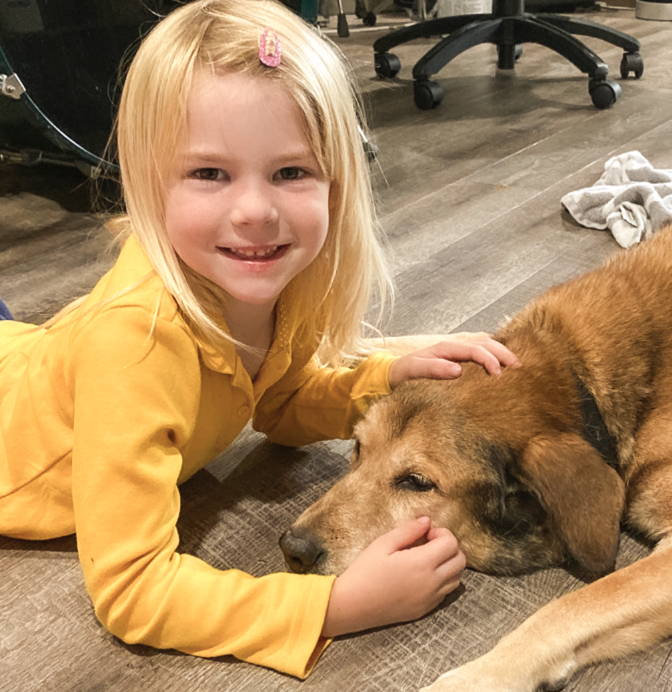 Kendal saying goodbye to Moxie, a most loyal and good doggo a few weeks ago.

At this stage, death is still an amorphous concept for children. The finality is difficult to grasp. They may believe death is temporary or reversible, and it’s not uncommon for children to believe a pill from a doctor or even a magic spell can reinfuse life. You can thank Disney for that one.

Advice: Here, finesse is the name of the game. It’s important that parents avoid using vague phrases, but also steer clear of blunt, graphic explanations. For example, telling your child that Rufus is “sleeping forever” can be confusing and unclear. But if you can find the line between that and “Rufus is worm food rotting in the dirt for eternity” your kid will be better equipped to handle death in the future.

Brace Yourselves, Questions Are Coming (Age 4-9)

Around age four, the brain has developed enough to grasp the concept of irreversibility. Kids understand that death is the end, but fail to grasp causality. Commonly, death in the imagination of a child takes the form of cartoonish or otherwise fabricated representations like “the monster under the bed” or “the fella’ in black robes with the huge sickle”.

It’s natural for juvenile defense mechanisms to take hold as well. They may employ denial or avoidance. Children may understand that death is final, but subconsciously believe that death only happens to other people and not essential caretakers AKA mom and dad.

Advice: At this stage, expect questions, lots and lots of lofty, uncomfortable questions.

You’re a parent, so you’re somewhat used to the interrogation, but have simple, concise answers planned in advance for your child. Be sure to observe them at play, as this is a major form of expression at this age. Lastly, talk about your emotions as a parent. This is critical, as it helps inform your child how they should be feeling, and that feelings are, in fact, a good thing.

As children approach their teen years, the concept of death is clearer. They begin to formulate more realistic questions and ideas about the concept itself, and finally understand death’s universality. The afterlife is often contemplated, albeit in a shallow manner. But the fear of death is still unrealized, and kids continue to display elements of juvenile defense mechanisms.

Advice: At this age, you can be more direct when breaking the bad news about your passed pet. Death is not fully realized, but as a concept your child is well aware of mortality. Also, because your child’s capacity for critical thought has improved, be prepared for more in-depth questions about the physical nature of the dog’s body once it’s dead. They can get pretty morbid and creepy, but don’t worry your kid isn’t a serial killer, they’re just curious… probably.

While explaining death to a toddler is difficult, dealing with the myriad, unpredictable ways teens can react applies a fresh coat of complexity to the problem. Teens understand death, but, like many adults, struggle to comprehend and express their emotions surrounding it. Isolation isn’t uncommon in response to the death of a family pet, as teens contemplate the very idea of life itself.

Mood swings and erratic behavior can also emerge. Let’s be honest though—teenagers, man. This may or may not be a new behavior in your household.

Advice: First of all, be prepared for a range of potential emotions. The strength of the bond between your teen and your family dog can greatly affect how they deal with its passing. An increased feeling of invincibility coupled with a plethora of new life experiences can lead to risky behavior following a loss. It’s vital to balance their need for freedom and expression with the same expectation of good behavior. In other words, 1970s rock band 38 Special said it best, “hold on loosely, but don’t let go.” The line is different for every parent. 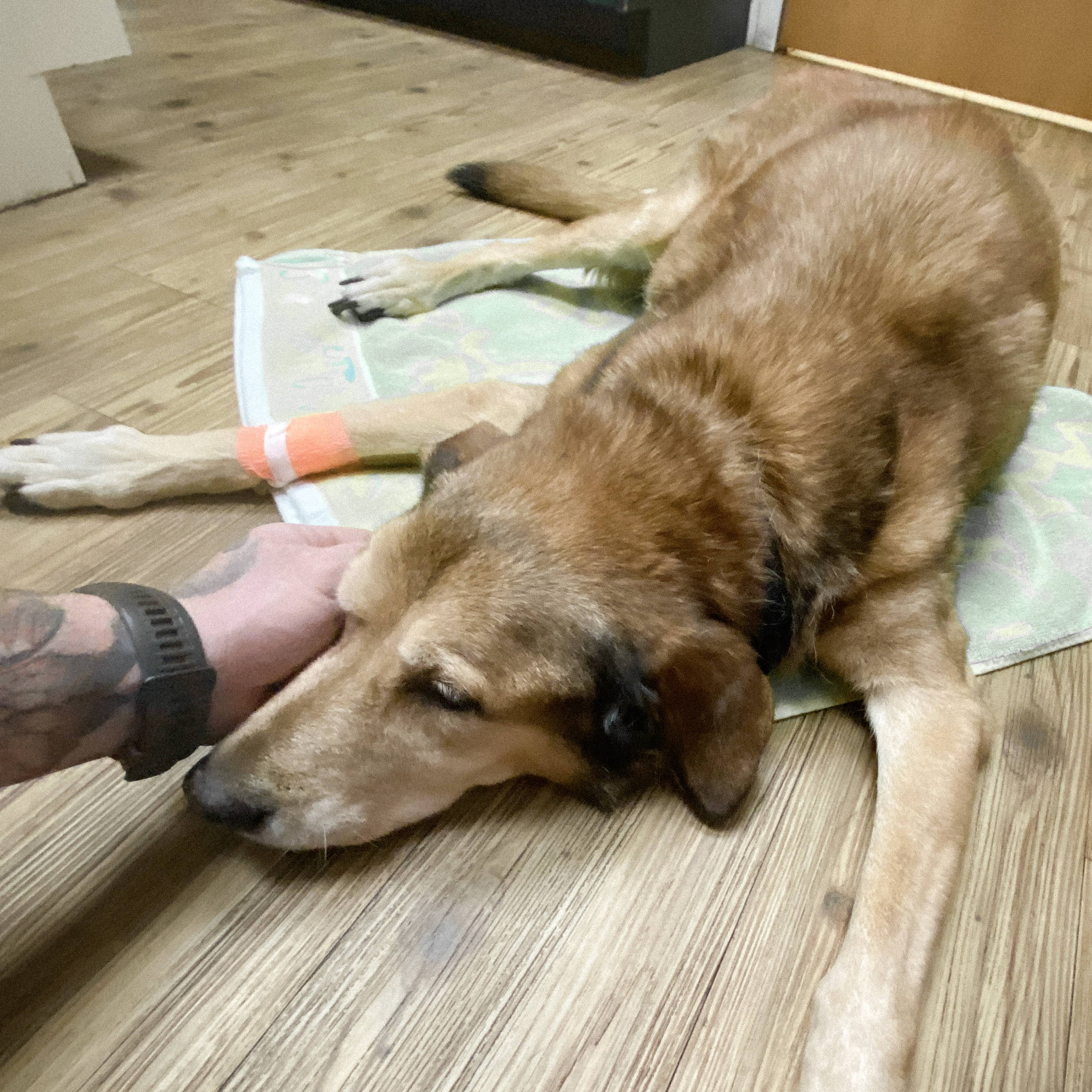 “Kendal was GANGSTER! But, Brandy was a mess.” ­–TBG CEO, Beav Broadie, on his family’s reaction to the loss of their dog a few weeks ago. (TBG Podcast: Episode 25)

Moving On And The Dog Gone Decision

So, you broke the news. The hard part is over, right? Well, sort of. Now you have to decide what comes next. But don’t sweat it, you’re unfortunately not alone.

A few weeks ago, Tactical Baby Gear CEO and avid dog lover, Beav Brodie, discussed this topic on the Tactical Baby Gear Podcast. His dog and longtime sidekick, Moxie, passed away, and it led to a bit of a quandary. The same quandary you find yourself in now.

On one hand, it’s tempting to just pull the trigger and adopt another dog. Replace the emptiness in your household with a new, fluffy, energetic bundle of joy. Never a bad option.

On the other hand, and in the spirit of the silver linings we mentioned before, Beav discussed how the death of a family dog can bring with it new opportunities. No longer hamstringed by feeding and walking schedules, you have more bandwidth, more opportunity to create memories with family. And let’s not forget, you’re gifted with more time to remember all the years spent with your loyal, happy, loving best friend.

As they say, when one door closes, another opens. The choice is yours. But whichever door you open, make sure you don’t let the dog out.

How I Turned My Home Office Into a Nursery

Hey guys, it’s Beav! I put off starting on the nursery as long as I could, but with Brandy’s baby shower coming up, I...
Read More

What Were We Thinking ???

Jumping Out of a Plane As you may have seen on our social media, some of our team recently had the grea...
Read More
← BACK TO BLOG
© 2021 Tactical Baby Gear - All Rights Reserved. Theme by Ethercycle